Purchase my books at Amazon India

It had been eight long months since my last trek (Torna) and my feet were itching to once again head towards the Sahyadris ! . Months had passed with me making and canceling plans for some or the other trek. Soon , the month of March arrived , practically the last month before the heat and sun of the summers made trekking a boring and tiring affair ! . A trek had to be done now , or I would have to wait out the summers !
I chanced upon a new trekking group ‘TREK MATES’ on orkut , saw that they were going to Alang and Madan a couple of days later and decided to join them . A couple of calls and I was in ! .It took me all of fifteen minutes to find out , ask my parents and register myself !!

Alang and Madangad are located in the Igatpuri region, north of Mumbai just before Nashik. These two, along with a third, Kulang, form a celebrated mountain range. These three hill forts provide some of the toughest and longest climbs in the Sahyadri mountains and are something of a pilgrimage for trekkers !

So there I was , raring to go for the trek . I was to catch the VT – Kasara local , which I did at Kurla , alongwith another guy who had joined from Panvel . Me and Devkiran got into the second last car , just as it had been mentioned in community page .
” Call up Shashikant ,” I said ” He was supposed to get in Dadar itself ” . Devkiran , after trying a couple of times , managed to get a call through . Apparently they , Shashi and a couple of others were in another bogey . Next station , I and Devkiran got down and quickly scampered across . We met Shashikant , Sonali and Samyukta and time passed uneventfully till Kalwa . Nilesh , Priti , Prasad and some others were to join us at Kalwa .

” They got into the second last car ” said Shashi , as we passed Kalwa . I again ran back ,alongwith the others , to the second last bogey when the train stopped at the next station !!! . A few others joined us at Kalyan and the group was almost complete . Almost except one guy , Vikram Singh , who had decided to take a bus to Kalyan from Panvel . He got stuck in traffic jams , missed the train and finally hitch hiked his way to Kasara ! .
In the train though , the crowd got progressively lesser as we passed Kalyan . For the last leg of the journey , it was just us in the whole compartment . I stretched myself out on the seats , wandered around , chatted with my new friends , stood for sometime at the door enjoying the breeze ! Fooling around in an empty local is an experience in itself ! Dozens of blue coloured handles swung rhythmically from the roof , seeming almost surreal without anyone holding onto them for support ! .
We finally reached Kasara at around 3 am on the 7th . For reaching Ambevadi , the base village , Nilesh had already arranged for a couple of jeeps . After a quick introduction round , we were off ! . I found myself sitting on the overhang of the bloody vehicle . With the guy driving like Schumacher , it was one thrilling experience . I felt like I was sitting on a springboard ! . So there we were , bouncing along potholed roads for a good two hours before Ambevadi came into sight . Here the potholes came to an end (and so did the road ) . There wasnt any proper road leading to the village , just crushed yellow stones marking the way . Was primarily meant for bullock carts i guess . We finally reached the village at day break . I quickly clambered out , glad that I wasnt feeling like a jackhammer ‘ any more ! .
After a quick tea and breakfast at a kind villager’s house , we set off for our trek . Accompanying us were Dyanesh and another guy whose name I forgot , our guides . A few minutes of walking and the full range of Kalsubai came into view . Well , words cant describe the huge mountains lording over the tiny village and us . To the far left was Kalsubai , right in front of us was the huge wall of Alang , like a massive wave of basalt , stopped dead in its tracks . Further out were Madan and the square massif of Kulang . I was totally awed . Torna was big , but this was scary !
Our trek started on a long , low lying spur jutting out of Alang . Like any other hillock , it was covered in deciduous forests , so common throughout Maharashtra. Dried leaves scrunched under our feet as we made our way ahead . Sometimes the path would rise ,and at other times stay flat . The branches of the trees created just enough shade to make the hike a pleasant one ! . After about a couple of hours of trekking , we came to a rock patch . This was the simplest one on the entire fort ! . A gentle gradient , with enough footholds to help us along . Of course , falling would still have been disastrous , but at least the climbing was pretty easy ! . We came to a small cave , where we dumped our bags and had some snacks . ” theplas anyone ” someone asked . I stretched my hand out for a couple . People were fooling around , cracking jokes , taking snaps .. and getting ready for the long traverse to Madan gad . We stepped out of the cave and turned left . With the mountain on one side and the valley on the other , we starting trekking our way to Madan .

At one point on the traverse , we came across a very exposed patch . The entire traverse is exposed actually , but this was particulary narrow , and sloping straight into the valley . It was a bit tricky , but everyone was managing it without any hassles . One , two , three , four , five .. then all of a sudden , Shashi , who was right in front of me , tripped and slipped towards the valley . My heart skipped a beat , as Shashi fell , hands flailing . Then , just in the nick of time , Nilesh , who had been standing there to guide people across , grabbed Shashi’s wrist . I heaved a sigh of relief . A few seconds here or there , and it would have been a very different story . I can vouch for that .. I had a ringside view of the action . But the trek had to go on , we had a couple of mountains to conquer !

Crude steps here and there marked the way to the top . Before long we had reached the uppermost plateau . Remnants of fortifications lay strewn all over the place . Further ahead , huge water tanks of stone . Amazingly , they still had plenty of water even in March ! . Finally , after walking on the plateau for about half an hour , we reached the summit . The view from here was even more amazing than Madangad . Alang stretched out on either side , like two huge arms .We could see Madan , Kulang , Kalsubai as also Harishchandragad and theMalshej ghat region , albeit hazily in the far distance .
After wandering around for some time , we started back for the caves . We were just in time for tea and breakfast . Breakfast was of course the all time favourite maggi . ! I had brought a bowl with me for tea and maggi both . I first had maggi in it , then the tea ! Thts what you call masala chai I guess ! . 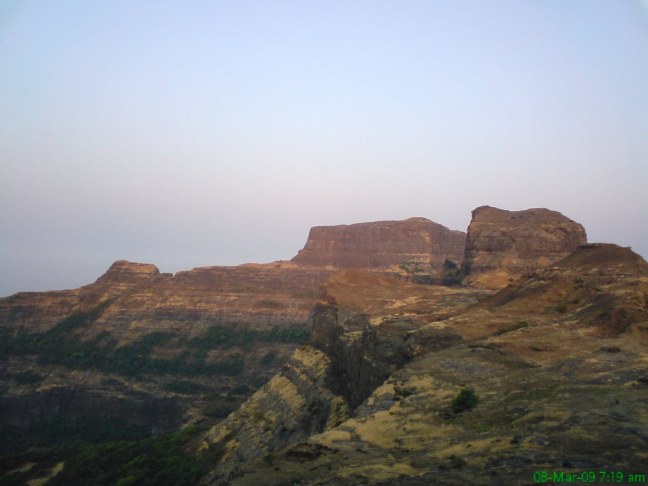 Breakfast done , it was time to descend . Before long , I found myself doing the second rappel of my life . Rappelling down the patch was far easier than climbing up ! . Keyur infact did a commando style rappel , with his back to the wall ( pun unintended ! ) . Everyone , now fresh after a good nights sleep , was having a good time at the rock patch . Garudi ( Prathamesh ) busied himself with throwing khajur seeds at us , who had rappelled down . Well , when it was his turn to get down , he got plenty of whacks before his feet touched the ground ! . Me , Shashi , Sonali , and some NRI from Madrid ( forgot his name .. sorry who ever tht was ) started descending ahead of the others .
The scree and rock patches made the descent more than thrilling . But at the same time , it was far less time consuming . Though we were in front , Shashi and Samyukta took a wrong turn about ten minutes from the base and generally got everyone involved for 20 – 25 minutes in a really unnecessary problem . Parag had followed them into that wrong turn , so now we had three people roaming around on the mountain. We cried ourselves hoarse shouting ‘Shashi’ and ‘Samyukta’ , ‘Parag’ and thankfully they quickly found their way to the village .
We took an ST then to Igatpuri . Time was merrily spent in singing popular songs and cracking jokes and time simply flew past . I didnt even realise when we entered Igatpuri ! . From Igatpuri , by jeep to Kasara . Then the long journey by local to Thane . I had a new friend in Vikram Singh , so I had company right upto Vashi .
An exhilarating and trek had finally come to an end . Excellent planning and management by Nilesh , Priti , Vikram and Prasad and a great group of trekkers had ensured a memorable day !!