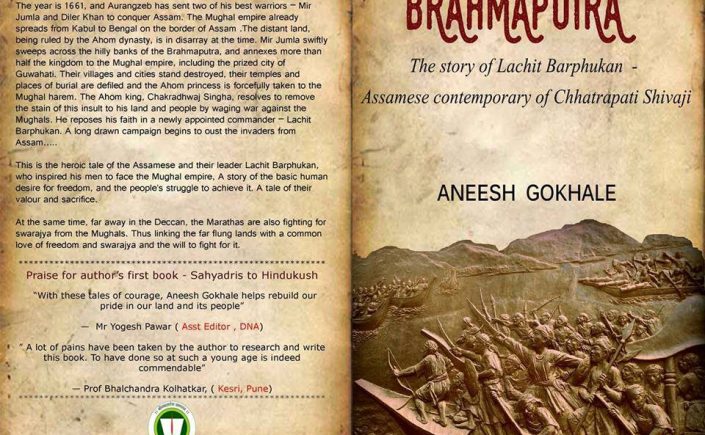 Mr. Achyut Madhav Gokhale is a Padmashree awardee . He served in Nagaland cadre of IAS for 23 years as also for 12 in the  Central Secretariat. He was Member Secretary of a GoI Committee set up to study the Bodo agitation, which gave him deep insights into Assamese culture and history. He has written this book’s foreword. Read about him here

Purchase on flipkart   or with  Amazon Fulfilled (Free Shipping)

There was so much of ignorance, born out of indifference perhaps, about the states to the east of Bengal , that some 10 or 20 years ago, people did not know which way the mighty Brahmaputra flowed, whether Shillong was north or south of the river etc . Today of course things are better,though indifference lingers. Many many tourist buses from all over the country visit Assam and the surrounding hill states, and peoples general awareness has improved. It is in the context of the not yet past awful ignorance,  that a young writer, Aneesh Gokhale, has dared to probe the history of Assam.

It was awe inspiring to read “BRAHMAPUTRA”,  a novel by Aneesh Gokhale on the life and times of a true hero of the country,  Lachit Barphukan, popularly known as The Shivaji of Assam. Now I am ready to call Shivaji the Lachit of Maharashtra !

There is so much I never knew about Assam and its history, except what I read and heard about during my one year as the Member Secretary of a committee of the Government of India formed in 1991 for studying the Bodo agitation and making recommendations on what could be done . That time, I did read quite a few books and documents, but most of these related to the British rule in Assam, from 1826. Lachit Barphukan’s times were more than 150 years before the end of the Ahom rule in 1826.

I was  in the Indian Administrative Service, in the Nagaland cadre, spent altogether 23 years under the Government of Nagaland. Apart from being familiar with typically Ahom names, such as Phukan, Chetia, Gohain, Doloi, Baruah etc, there was no knowledge of Assam, except about the mighty river which we call Brahmaputra, and people of the region variously call Dilao or Luhit or Siang. Also much hearsay about the princess of Bodos, Hidimba, her son Ghatotkach, Who is said to have participated  in the family feud of North India called the Mahabharat, in which Prince Ghatotkach, son of Bhim and Princess Hidimba, died a hero’s death. I am deliberately using a description which some learned Bodos gave me.

So, when Aneesh asked me to pen down a foreword, and handed over his first drafts, I became curious again about the history of Assam. As I read through,Ii found every event that he describes in the book, completely new to me. For example that the gigantic armies of the Mughal emperors and others before that had repeatedly attempted to subjugate the Ahom kingdom but they were finally routed by a person called Lachit, the Borphukan (Commander in Chief), and what was new to me was that the final battle took place entirely on the waters of the great river in the vicinity of todays Guwahati. It was a naval battle, on the ocean like river, fought at places which Lachit chose as most suitable for his boat-fleet and most unsuitable for the ship-fleet of the Mughals.

Aneesh is my nephew and i am very proud that some one representing the second generation of post independence India, has tenaciously pursued his quest to find out about the times when Shivaji was bringing the Goliath of the  mughal armies to the knees, and in some other part of India’s someone with the same guts and pride, Barphukan Lachit, was trouncing the Goliath.

Aneesh made tremendous efforts in the making of the book – of visiting Assam, and looking at the sites where fighting between the Ahom Armies and Mughals took place, talking to people there who,traditionally speak very little. This focussed mind is rare these days of globalisation and investment of time and money in merely selling popcorn.

I and my wife, Savita, are grateful to God to give us an opportunity to see someone in  our next generation, nephew Aneesh, who has the mind and the guts to tread paths which are untread these days.

We wish the book all the best and wish Aneesh continues his quest without let up.